Why is Bern the Capital of Switzerland? 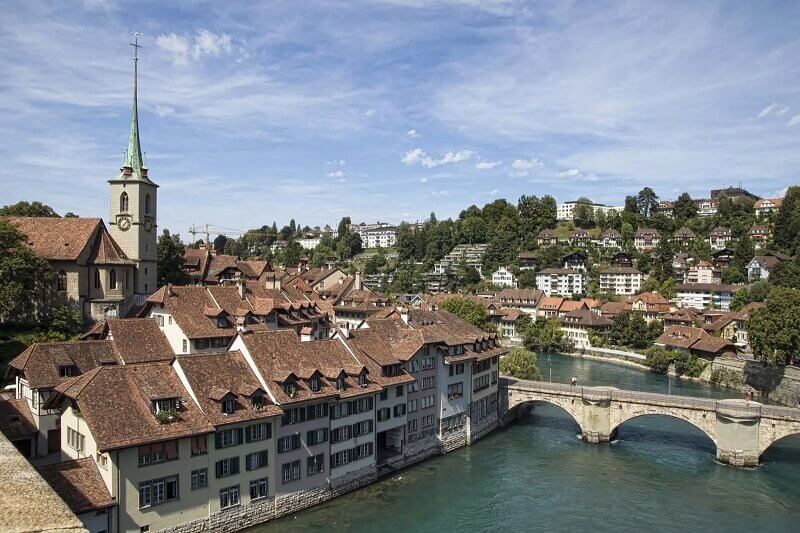 Bern, or Berne, is a city and the capital of Switzerland’s Bern canton in the country’s west central region. The Aare River winds through a tight bend near here. Bern was established in 1191 by Berthold V, duke of Zähringen, as a military outpost on the border between the German-speaking Alemanni and the French-speaking residents of Burgundy. The outpost was likely inspired by the presence of the ancient fortress of Nydegg, defending a passage across the Aare. After the Zähringen dynasty was destroyed in 1218, Bern gained its independence as an imperial city. Over time, it grew in influence by absorbing neighbouring territories, eventually becoming a sovereign nation that, in 1353, joined the Swiss Confederation and quickly assumed leadership. Bern was largely made out of wood until a disastrous fire in 1405 forced its reconstruction with sandstone. Although most of the city has been renovated and updated since that time, the core (Old Bern) has been preserved. This article will give you important information about Bern and why Bern is the capital of Switzerland.

Know the Reasons Why is Bern the Capital of Switzerland

Bern, the charming capital of Switzerland, is often a source of surprise. They argue that a more reasonable choice would be international Geneva or industrial Zurich. However, Bern was selected as the “federal city” exactly 170 years ago in order to prevent a centralization of authority.

The territory that is today Switzerland was unified under the rule of the Holy Roman Empire in the 11th century. However, the geographic isolation of the area, along with the slow erosion of imperial power, gave birth to the emergence of largely autonomous states. Feudal dynasties consolidated authority in the government and the courts. Monasteries and new cities were established all throughout what would become Switzerland by the Zähringen, Savoy, Kyburg, and Habsburg dynasties.

In 1191, Duke Berchtold V of Zähringen established Bern as a military outpost. Because of the tensions between his family and the Savoys, Bern was a top choice for a new home. The location, which included a historic fortress, was situated on the Aare River in the interior boundary and was therefore very easy to defend.

As time went on, Bern’s position on the Aare made it a prime site for enabling transportation and transporting products into and out of Switzerland.

History of Bern as Capital of Switzerland

Bern became a free imperial city within the Holy Roman Empire, meaning it was solely subject to the power of the emperor, after the Zähringen dynasty had fallen to ruin by the 13th century.

Bern would gradually grow in influence by absorbing neighbouring regions. It declared its independence and joined the Swiss Confederation in 1353, eventually rising to the position of leader. Bern had 52 provinces under its control and a lot of influence by the 18th century. When Switzerland became a federal republic in 1848, Bern was chosen as the country’s capital because of its central location and political influence.

Why not Zurich or Geneva as the Capital of Switzerland?

The capital of a country is not usually the city with the most population or the most significant economy.

Geneva had a few things working against it when it came time to choose the Federal City. To begin with, the city’s position on Switzerland’s westernmost tip isn’t ideal for a capital. Second, while German is the official language of the rest of Switzerland, French is spoken by the majority in Geneva.

Zürich, situated as it is in the country’s northernmost region, is hardly a hub, either, especially when compared to Bern. Bern made more sense as the Federal City since it could accommodate the unfinished federal government buildings, which Zürich would not have.

Bern’s choice as Switzerland’s capital, however, may have had more to do with a political compromise between Zürich and Geneva than with any particular cultural or linguistic ties to Bern itself. Bern was an acceptable middle ground between two rival cities, just as Canada’s capital of Ottawa was between the two major cities of Toronto (English) and Montreal (French).

Other Important Facts to know about Bern- Capital of Switzerland

In short, Bern was chosen as the new federal capital on November 28, 1848, with a majority of parliament members voting for it over Zurich and Lucerne. That’s why Geneva was never a contender. Recognizing the need for equilibrium, the lawmakers were wary of giving too much influence to Zurich, the country’s economic hub.